Welcome to the Grahame’s Bakery 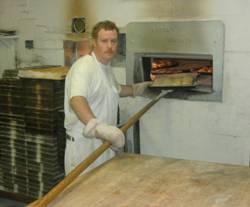 Whether it was just age, or as a result of the pneumatic pounding of metal posts into the ground

next door in the new construction of a commercial building, we’ll never know, but it resulted

in the bakery having to close its doors for a few weeks in the late winter of 2009 and repair the masonry work inside the oven.

The story is best told by Ottawa Sun writer Tom Van Dusen in a column he wrote in May 2009.

Warming to their task

KEMPTVILLE -- When your 1885 commercial wood-fired oven goes on the fritz, who are you going to call?

The options are limited, but local baker Rick Grahame figured he knew the right guy for the job -- Carleton Place-area stonemason Joe Zuccarini, who trained at the hands of Italian masters.

Zuccarini, a versatile craftsman who likes a good challenge, spends some of his time repairing heritage stone buildings.

He had also constructed his own smaller-scale backyard wood oven, and a few years ago, he'd done a comparatively minor patch job on Grahame's mammoth oven, which retains some of its heat for up to four days after the fire has gone out.

The oven gained iconic status during the 1998 ice storm, when, with the power out for days, the oven was pressed into service to cook dozens of turkeys and other food for much of the community.

Along with his sister Debbie, Grahame has been operating the bakery since 2005, when their father Ken -- a second-generation baker and legendary character who dished out diatribes along with the donuts -- passed away.

When Grahame noticed that part of the oven's arched brickwork had collapsed, he knew it was time for a major overhaul.

With Zuccarini's input, the siblings considered their options: Closing down, changing over to a gas-fired oven or rebuilding the wood-fueled oven.

"We decided to preserve the oven, not just for us but for everyone," Grahame said, adding that it's an important piece of Canadian history. It's also the bakery's trademark, giving bread, rolls and other baked goods a distinctive texture and taste.

Zuccarini was the man for the job, and the work began. The task required Grahame to close the bakery for two weeks and ended up costing him several thousand dollars in labour and materials.

The Grahames softened the financial blow of shutting their doors by choosing a period when they traditionally close for a break anyway, and by providing as much baking in advance as they could for regular customers.

The bakery is scheduled to reopen on Tuesday with a brand new firebox, which should be good to go for at least another 100 years, Zuccarini said.

The job wasn't easy and it wasn't always safe, the mason said, explaining the project required the installation of a new firebrick in the curved top of the oven.

He had nothing but praise for the masons who went before him, those who designed the oven without benefit of modern technology, or even firebrick, creating what he sees as a work of art requiring few repairs in almost 125 years.

"Look at that inside slope," Zuccarini gushed, pointing it out to a visitor through the oven door, explaining that it carries the fire lit at the front right around the oven, providing uniform heat.

"I don't know how they figured the right degree on the slope ... but it's pure genius," he said.